In this post, you will learn more about the sequence of events that led to the creation of neseda up to its current version

It started with a blog post and an outline

On 8 June 2015, Vlado Zlatoš published a post on his blog entitled Let’s Change the Degenerative Culture of Work Environment, where he explained the degenerative impact of today’s work environment especially because we are forced to sit for hours, which might be a norm, but it is definitely not normal..

He explained why “ergonomic chairs” or exercise balls are not the solution. He added a few tips which we can all apply to alleviate negative impact of sitting all day. At the end of the post, he outlined his vision of an “ideal office chair”:

Vlado added that at least he would need such a chair and if anyone could help him construct it, he or she should get in touch.

Then a series of events unfolded

People started to discuss the article.

Vlado saw that he was not the only one dealing with this issue. One of the people who became enthusiastic about finding a solution to the problem was Michal Truban , entrepreneur (at that time CEO at Websupport) and an active triathlete.

Michal realized that he too had to spend a lot of time in front of a computer, that his chair was not suitable and from the sports perspective, he could use more movement (a coach told him that although he trained like a pro, he was regenerating like an amateur, so it doesn’t make any sense to spend so much time training if he spends 8 hours a day sitting and lets his muscles become flabby and shortened).

Vlado and Michal talked over lunch and started to look for a solution. I still remember (and I would probably find the post if I kept scrolling long enough) that in 2015, Michal Truban looked for someone who could construct a tailor-made chair in a facebook status.

As I had read Vlado’s article outlining a perfect chair and his wish to find someone who could help him construct it, I commented on Michal’s facebook post by saying something like “Call Vlado Zlatoš, I know he is/was looking for such person as well”, to which Michal replied “Yep, it’s the same project” ????

Fast forward into the future

In 2015, Michal and Vlado really did find someone who could help them build the first prototype based on their requirements. They also created the name neseda, they made a plan that production will start with 100 pieces and that the following version would be equipped with sensors and an app that would collect data on your sitting habits and if enabled, it would send you an alert to change positions.

In 2016, Michal and Vlado were contacted by a professional design studio Werkemotion, whose team was genuinely interested in the idea and thought they could create a much more sophisticated design.

After tremendous improvements in the design, testing of several manufacturers of individual parts started. This brings us to 2017, when the first neseda as we know it today was constructed. In summer 2017, the first hundred chairs were put on the market.

It may seem like a lot of time passed from the initial idea until its realization, but during the 2 years, so much work was done to make sure that our first clients got neseda of the quality it is today (for example, selection of fabric and stitching took a long time and it was precisely the quality of fabric and stitching that attracted Šimon Šicko, CEO at Pixel Federation, who is now one of our clients.)

At that time (summer 2017, sales launch), I already worked on the project. I joined the team in April 2017 as a part-time help with various processes and as the project grew, so did the complexity of some of the processes.

My part-time position changed into a full-time one and we also hired Dominika, our customer service and administration star. I became CEO in September 2017, we’ve had more and more orders, we competed at Startup Awards 2017 finale, but we still focus on the reason why neseda was born: to change the degenerative culture of work environment.

We started as a startup with a wish to grow organically and gradually, and this is how we operate – we don’t spend money that we don’t have, we focus on high-quality products and our clients, we didn’t hire ad agencies that would promote us.

Most clients contact us because they agree with the general vision, i.e. neseda’s philosophy. This helps us avoid complaints made by disappointed clients who bought the product because of advertising. Our clients have become our ambassadors and help us spread the change.

We will talk about our today’s situation and plans in the next article, because I wanted to use this post to tell you how neseda was born

A few myths on why and how neseda was born

Some people think that neseda was created as an effort to “capitalize on the current trend of ergonomic chairs”. They can’t be more wrong. Firstly because the hype around ergonomic chairs is long gone and the market is oversaturated. And what’s more, Vlado Zlatoš and Michal Truban wanted to solve their own problem, so the desire to create a product was intrinsic and genuine without the vision of building a new company.

We are often asked how we manufacture the chair, what its lifetime is, etc. None of us has ever taken part in construction of chairs, which does not mean that we don’t do it properly. Neseda has STN EN 1335, certification for office furniture, it has passed stress tests simulating several years of use with no signs of wear (protocol number N-007-17) and even if there were any imperfections, neseda comes with at least 3-year warranty.

Don’t forget that the chair was designed by a professional studio. In 3D models, every millimeter was well thought out, the center of gravity is perfectly balanced, we own the design, which was made just for us and not from some template. And finally, our chairs are made by a professional Slovak company which manufactures furniture for many international brands, so there’s really no need to worry about the quality.

To sum up, for me, the way how neseda was born is the very reason why I trust the product, why I work on it and why I try to help it succeed:

So, this is how neseda was born.

Thanks for reading the post and if you have any questions, don’t hesitate and ask in the comments, we will be happy to answer. 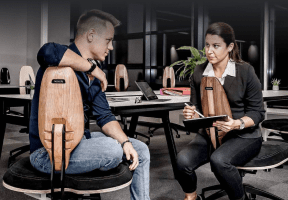 NESEDA.com
Manage cookie consent
To provide the best experience, we use technologies such as cookies to store and/or access device information. Consenting to these technologies will allow us to process data such as browsing behavior or unique IDs on this site. Disagreeing or withdrawing consent may adversely affect certain features and functions.
Manage options Manage services Manage vendors Read more about these purposes
Show preferences
{title} {title} {title}